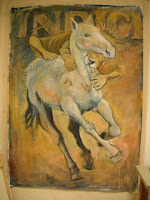 While painting on these two paintings (both shown in progress) I was listening to a book on tape, "Team of Rivals" "The Political Genius of Abraham Lincoln: by Doris Kearns Goodwin. The White Horse and A Red Cloud Sunset.

The symbolism of the white horse representing arrogance, passion, lust and a claim of indignation I had recently, and characters completely opposite that of Mr. Lincoln, were suggested in a lecture I listened to and then transcribed. The lecturer, Edith Armstrong Hoyt, made a special study of apocalyptic literature while a student at the University of Chicago under Dr. Richard Molton -sometime in the 40's or 50's is my guess considering the sound of the recording. For many years after graduating she lectured on the subject and her book, Studies in the Apocalypse of John of Patmos was well known in literature on the Bible.

Mrs. Hoyt's lecture was on an LP and then transferred to a CD and then I put it into a program on my computer so I could transcribe it.

Here's what Mrs. Hoyt says about the first horseman in St. John's vision in the Apocalypse, and what I use the white horse to represent. "...he carries a bow in his hand, he is arrogant, thinking he can conquer and destroy to his hearts content. The Greek word here translated "white' does not signify purity. It is a word which indicates what we would call today, telltale gray, or grayish dirty white - a smudged white." She goes on later to associate the white horse and its rider with passionate lust. "Lust arrogantly assumes that it can ride roughshod over every decency; coming forth conquering and to conquer." But the "living creature" associated with this white horse - the lion - is "established there with the Lamb himself...." and "in the presence of all power, the lion creature, lust has no power to operate."

So this is why I've got the lion attacking with a winning posture over the horse.

The Red Cloud Sunset is pictured here after one evening session of about 3 hours. 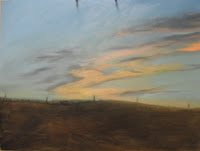