Wood in Winter and David McCullough's "1776" 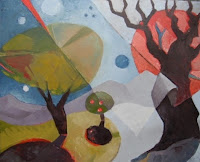 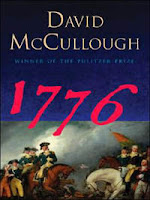 While painting the new version of Wood in Winter - New Wood in Winter (24"x30" oil)- I've been listening to this book:
Non-fiction
Publisher Simon & Schuster, Inc.
Publication date May 24, 2005
Pages 386
From Wikipedia, the free encyclopedia:
"1776 (released in the United Kingdom as 1776: America and Britain At War)[1] is a book written by David McCullough, first published by Simon & Schuster on May 24, 2005. The work is considered a companion piece to McCullough's earlier biography of John Adams, and focuses on the events surrounding the start of the American Revolution. While revolving mostly around the leadership (and often indecisiveness) of George Washington, there is also considerable attention given to King George III, General Howe, Henry Knox, and Nathanael Greene. Key Revolutionary War battles detailed in the book include the Battle of Dorchester Heights, the Battle of Long Island, and the Battle of Trenton.[2] The actual signing of the Declaration of Independence is treated as a somewhat minor detail, as the main focus of the book is on military rather than political events. The book includes a number of pages of full color illustrations, including portraits and historical battlefield maps made by British engineers at the time."
Posted by Leora Platte at 11:19 AM