oil on 30x30 canvas $500
This painting, originally titled "Office Attire: rick rack and binding tape", has been renamed to be part of a show to support the protest against Keystone XL, the oil pipeline scheduled to run right through the Ogallala Aquifer in Nebraska. In Nebraska, it would be stretch from Rock County southeast to Jefferson County, south of Lincoln.

The 1,300 miles of pipeline would carry an estimated 900,000 barrels of crude oil per day from Alberta, Canada, to a refinery near Houston.

Construction on the first Keystone pipeline is already happening in Kansas. Construction on Keystone XL, proposed by company TransCanada, is set to start in a few months.

The 3-foot diameter pipe would be buried 4 foot underground. Its oil would go to refineries near St. Louis and then to others along the Gulf Coast. 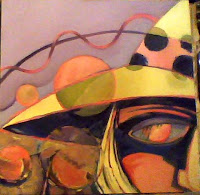